Super-Abled Comics is a comics anthology featuring six different stories about disabled superheroes from disabled writers.
-Rebuilt: after a terrible accident, a young woman seeks a new technology to replace what she’s lost. By Trace Wilson & Sarah Fletcher.
-The One Arm Wondermom: Born different, The One Arm Wondermom uses her powers to show there’s a hero in all of us, no matter our ability or size. By Kim Stumbo and Willy Wofford.
– The Chimpanchines: In a far away galaxy, a team of cyborg apes take on a band of ruthless space pirates. By Travis Rivas & Mauricio Campetella.
-One-Armed Wonder: Picked on his whole life for being different, Damien finally gains the ability to make a difference, but will he use his new found abilities to help others or for selfish gain? By Brian Marquez and Vince Alvendia.
-Chiara, Dancing in Darkness: When a sentient virus takes over a small country and tries to eliminate anything that’s different, Chiara must use her powers to save her best friend. By Sarah Tuberty and Mauricio Campetella.
-Cobalt: A young man gets caught up with the mob and loses more than he bargained, now the mob has his little brother and he’ll do whatever it takes to get him back. By Jake Adams & Jacob Newell. 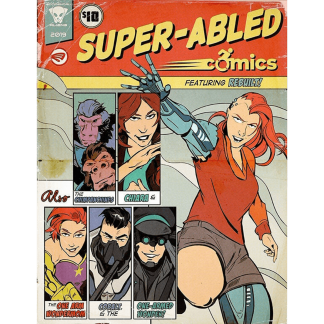